THE PENETRATING INSIGHT OF ILLUSTRATION
This years' Sentieri Illustrati, now in its eight edition, shows us at first hand about illustration from Slovenia, well-known for both its own history and its development through the Academy of Visual Arts in Lubiana. There are, of course, also Italian illustrators who have grown up in Friuli Venezia Giulia, trained in leading schools both in Italy and abroad, and then honed their skills in a world without borders. Tales, stories, images which, as our event is repeated, each year open up new horizons.
To approach carefully and without pre-conceptions. The approach which these pathways require us to follow. To decide when to mind our step and when to extend our gaze, until we achieve that carefree state where our closeness to what we see becomes penetrating and hence within.
A glance which sees, but much more so. As it pauses and observes, enhances elaborates, remembers. A metaphore which has inspired Silvia Pignat, herself an illustrator and curator of our event, to imagine 'pathways' which reach many different artistic experiences, many different stories which represent and transform personal and collective worlds of a life well lived. The characters which animate these stories speak with simplicity and clarity, a little like the fairy tales of the past. Children can recognise themselves in these characters, as can many adults because the strength of an illustration is that it moves beyond imagination, towards a more creative vision of objects and the happenings of this world.
And so, with the arrival this year of these internationally-recognised exhibitors - following as they do in the wake of last year's Hungarians (and not only, as we have been honoured to host some of Italy's major contemporary illustrators, too) - we yet again find ourselves immersed in a world full of surprises. Animals who speak and play in the company of children, the dog who is enchanted to watch the kindly duckling, the roaring lion who does not raise fear, the crocodile with its simpathetic air, the rabbit asleep on the bear's tummy.
We discover mysterious houses, tunnels in underground labyrinths with light at the end. We can imagine long journeys in a water-filled well, sailing on an improbable boat.
Even the stories of migration can have a happy ending. Symbolic glances, with illustrations of great refinement, which come through to children while sometimes revealing the intricate world of adults.
This eighth edition of "Pathways" - which again shows the strength of illustration is its ability to produce "true art" - is truely revealing in the quality of story-telling and drawing. It is a field in which we wholeheartedly believe, and we are pleased to take this opportunity to thank all of those who have worked with us and helped to create and then build and strengthen our experience of collaboration and co-operation at the local, national and international levels, and bring together Friuli Venezia Giulia and other regions in Italy and abroad.
In particular, this year we would like to thank the group of illustrators from Lubiana who are now further strengthening the links between our Centre for Cultural Initiatives and other cultural centres in Slovenia.
Maria Francesca Vassallo
President
Centro Iniziative Culturali Pordenone

VESNA BENEDETIC
www.redramatou.com
e-mail: vesna.benedetic@gmail.com
Born in Gorizia in 1966. She studied in Milan the use of colour and she attended in Ljubljana the Fine Arts Academy. She has illustrated several books and covers, and twenty years ago she started collaborating with Galeb, Slovenian magazine for children. Nowdays che lives in Slovenja where she founded Ramatou, an art networking association. She condicts animation and drawing laboratories for children and adults.

MAJA KASTELIC
www.majakastelic.blogspot.com
e-mail: maja.kastelic@gmail.com
Born 1981, she studied Painting at the Academy of fine arts and design in Ljubljana (BA) and Philosophy and Theory of Visual Culture at the Faculty of Humanities in Koper (MA). A mother of two little boys, she is an enthusiastic children's book author and illustrator. She is the author of an awarded silent book A Boy and a House. Her works took part in exhibitions in Austria, Chine, Croatia, Japan, Italy and Slovenia, where she lives in Trebnje.

SILVAN OMERZU
Born in 1955, he graduated from the Pedagogical Academy in Ljubljana. He completed a specialist degree in Prague in puppet scenography and design. He has successfully been working for the theatre with his puppets, known for their combined variety of poverty, nobility, cheapness, beauty, tradition and modernity. In 2006, he mounted the installation Tears in a Kostanjevica church and since 2008, he has directed several plays. Known also as a book illustrator, he has received 11 international and 11 Slovene awards.

LAURA PIZZATO
www.lapiz.it
e-mail: laurapizzatocreative@gmail.com
Ha ricevuto diversi riconoscimenti nel mondo dei cortometraggi animati.
She was born in 1988 in Pordenone. She graduated in graphics and illustration from ISIA Urbino. She has taught in primary and secondary schools. At the moment she is taking part in projects of visual communication as graphic and web designer. She has received several recognitions artist for her short animated films.

PETER ŠKERL
www.peterskerl.com
e-mail: skerl.peter@gmail.com
Born in 1973, he already showed his artistic talent at various competitions as a primary pupil. He graduated in visual communications design at the Academy of Fine Arts in Ljubljana. He has illustrated about 40 children's books and many articles in children's magazines. He co-created theatre and puppet performances, as an amateur actor and also as artistic designer. He has exhibited his works in Croatia, United Arab Emirates, Germany, Japan, Iran, Italy, Slovenja.

DAMIJAN STEPANCIC
Senožeče 89
SI - 6224 Senožeče
Born in 1969, he is painter and illustrator, best known for his children's books illustrations. He graduated from the Academy of Fine Arts in Ljubljana in 1996. He immediatly started working as a freelance illustrator for children's book and journals. He has won several prices and has a rich productions of books for different publishers in Slovenia.

HANA STUPICA
www.behance.net/hstupica
e-mail: hana@stupica.si
Born in 1988 in Ljubljana. She graduatet from the Fine Arts and Design Academy in 2016.
During her school years she obtained several achievements and nominations. She took part in the 10th and 11th Sloveninan Biennal of Illustration in Ljubljana in 2012 and 2014. Her first book was published in 2014.

MARLENKA STUPICA
e-mail: irena.matko-lukan@mkz.si
Born in 1927 in Ljubljana where she graduated from the Academy of Fine Arts and Design in 1950. In 1972 she received her first prize, many others would follow both in Slovenia and abroad. A special UNICEF Award recognized her work in 1974. Overall, she has illustrated over one hundred children's books in several European countries: Czech Republic, France, Germany, Italy, Hungary. She is considered one of the top Slovene illustrators. 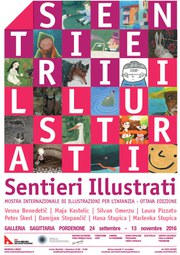