Outlines for a Competition

The Regional Institute for European Studies of Friuli Venezia Giulia announces the competition "Europe and Youth 2012". The competition is open to students in Universities and Schools of all levels throughout all the regions of Italy and the European Union.

choose one of the proposed themes

N.B. The titles proposed for university students and recent graduates will not exceed a total of 20,000 spaces. Extra credit can be assigned if the work is accompanied by a synthesis in English of no more than 1500 spaces, presented in video by the participant, using a cell phone or webcam.
AGE LIMIT: participants must not be more than twenty-six years old on the deadline, 5 April 2012.

TWO SPECIAL PRIZES OF €600,00 from the Foundation of the Cassa di Risparmio di Udine e Pordenone for papers on:

1. The City of Man. “The city of man, once an enclave in nature, has usurped nature’s place, reducing it to an enclave of the city.” (Hans Jonas, philosopher) “Cities are the true motors of innovation; they foster creativity and bring out the best in us in the solution of even the most difficult problems.” (Edward Glaeser, economist, Triumph of the City)
2. Political Europe. Europe is working towards the re-launching of an economy, the defects of which also originate from the lack of a credible European political dimension. How to recover and put into practice the original force that came from the sharing of rules and principles, rights and values?

TWO SPECIAL PRIZES OF €600,00 from the Banca Popolare FriulAdria-Crédit Agricole for papers on:

1. Resources for Culture. In several European countries fundraising is seen as an important resource for financing artistic and cultural production. In Italy, for cultural and fiscal reasons, this instrument is slow to being adopted. Analyze Italian policies of this type and compare them with those of at least two other countries in the European Union, and suggest some possible corrective measures.
2. Ten Recipes. Tito Boeri of the Bocconi University in Milan, and Pietro Garibaldi of the University of Turin, in their book, Le riforme a costo zero, have proposed ten no-cost reforms that would benefit Italian economic growth. Express your opinion, and analyze one or more reforms that have been, or are being, put into effect in other European countries

TWO SPECIAL PRIZES OF €600,00 from the Banca di Credito Cooperativo Pordenonese for papers on:

1. Winds from the Mediterranean. The revolutionary winds that have swept through North African countries have modified the socio-political scenarios of the Mediterranean, and brought into light the need for the European Union to also act as a protagonist. Study the historical, political and social transition of at least two countries and indicate desirable future developments.
2. Bankers of Europe. Retrace stages in European history, starting from the important role taken by Italian merchant families and bankers. As a starting point, you can use Medici Money: Banking, Metaphysics, and Art in Fifteenth-Century Florence, by Tim Parks.

Where are the Balkans headed? Twenty years after the fall of Yugoslavia, what’s the situation of the countries that came to be? What prospects of integration into Europe, and how much do memories of war weigh on them? Analyze projects aimed at social cohesion between the Adriatic nations through the strengthening of the value of cultural diversity, and projects of economic cooperation and support of investments. Point out problem areas and development.
N.B. A stage in a FINEST venue in the summer of 2012 will be awarded to one of the participants who write on this theme.

SPECIAL PRIZE of €600,00 from the Province of Pordenone for papers on:

Promoting tourism. Culture, gastronomy, areas of excellence, special events, but also original ideas for a slow tourism that creates a virtuous cycle of growth while respecting the environment. What does the area where you live aim at in promoting tourism? What characteristics or ambits should be spotlighted? Study one or more experiences in various European regions and make your own proposals.

SPECIAL PRIZE of €600,00 from the City of Pordenone for papers on:

Africa, democracy, corruption. The Nigerian writer Wole Soyinka, Nobel Prize for Literature in 1986, will be the protagonist of the “Dedica” Festival of Pordenone in March 2012. He has never ceased analyzing, in one form or another, the various types of corruption at levels of power, and has continued to exhort Europe to refrain from hampering Africa’s march towards democracy. Express your opinion.

N.B. These themes may be developed individually or in couple. A summary in English of not more than 500 spaces will receive extra attention in the awarding of prizes.

1. Food Waste. Every year, in Europe and North America, a quantity of food is destroyed that would satisfy more than three times what the hungry of the world need for minimum sustenance. Gather information and, to initiate your campaign to awaken public opinion, write an article of not more than 5,000 spaces, or create a concise graphic novel (or comic, following examples like Comic Life, Pixton, etc).
2. Citizenship. Citizenship to all babies born in Italy? Interview second generation boys and girls or your age. Gather opinions from people of different ages and backgrounds. Study the legislation on this subject in other European countries and express your opinion in an article of not more than 5,000 spaces.
3. Time to Get Ready. “By 2020, following European guidelines, Italy counts on covering 17% of national energy needs from renewable sources. Gather information on innovation, consistent political choices and the behavior of individuals. Express your opinion, taking into consideration the ten rules for energy conservation proposed by Luca Mercalli in his book, Prepariamoci.

N.B. The works can be developed individually, by small groups, or by a class.

1. Little Chemist. In Italy more than in other European countries, a myriad of house-cleaning products is bought and sold, with great waste, and often disappointing results. Are there other possibilities, efficient, economical and sustainable? Become a “Little Chemist” and find simple, natural remedies that can be used every day. Invent a rap (alternating your language with another European language that you are studying), to invite the whole family, including boys, to adopt good habits.
2. Happy Birthday. Buon compleanno! Eid milaad saeed! La multi ani! Gezuar ditelindjen! Mnohiya lita! Sheng ri kuai le… Celebrating with classmates who come from different countries can become a way to get to know each other better. Write about a personal experience, describing songs in different languages, games and recipes for sweets.

The works can be written in Italian or in another mother-tongue language. Each participant or group of participants can submit a single work only.
The works submitted (two copies for written works) must reach the Irse offices (Via Concordia, 7 - 33170 Pordenone - Italy) before the deadline of 5 April 2012. They will be accompanied by a typewritten form, giving the following information about the contestant: name, surname, telephone, address (street, city, postal code and email address), date and place of birth, specification of school class or university course of study, name and complete address of School or University, name of teacher or teachers who assisted. Obligatory: each work must be accompanied by a bibliography of works consulted and/or by a list of web sites consulted. All participating works become the property of IRSE, and will be divulged through its publications and various projects.

The award ceremony will take place in Pordenone on Sunday 27 May 2012. 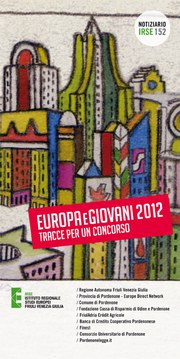